As with the Grand Tetons, all the bookable campsites in Yellowstone had been reserved months ahead. So we were banking on getting a walk in site in the park. Ed had actually managed to book a campsite site a few miles south of the southern park gate so our plan was to head there, spend the night and then get up early to nab a site in the park itself. We then discovered (to my utter horror!) from one of the park rangers, that we’d need to arrive at any of the ‘walk in’ campground before 7am (preferably by 6.30am!) to have any chance at all of getting a site. And since Yellowstone is such a massive park we were facing at least a 90 minute drive from the park entrance to any of the campsites!
So, in order to have a chance of making it to a Yellowstone campsite by 7am we decided to survive the night before with the absolute minimum so that we could pack up and be away as efficiently as possible the next morning. We did not get anything out of the truck apart from the tent, mattresses, sleeping bags & toothbrushes. We ate dinner at the restaurant next door to the campsite and slept in our clothes! We even put the tent up minus the fly sheet – one less thing to repack in the morning! This made the tent far colder than normal but made for an amazing experience – without the extra covering layer you can see right out of the roof of our tent. I happened to wake up at 2 am and looked up – without any light pollution the entire sky was filled with quite literally a million sparkling stars. I have never seen anything like it! Quite amazing and a sight I won’t ever forget.

We set the alarm for 4.30am and we were on the road at 5.15am. I had to forgo my morning cup of tea – but it was worth it – wow, what an experience, driving into Yellowstone before dawn. It’s a very, very busy park – and the roads gets jammed with traffic. But not at 5.30 in the morning! We hardly saw another car and felt like we had the place entirely to ourselves! The dawn light was amazing and mist was rising over the lakes – quite magical!

The animals did not seem worried about how early it was and were up and about. We saw our first bison – in the meadows and then quite literally on the roads!

We managed to arrive at the Norris Campground at 6.50am. There were already 11 people waiting in line hoping to get a site!

All we can say is the Norris campground coordinators really need some help with how they organise things. Their cruel & archaic system ensures that everyone hoping to get a campsite has to stand around in the freezing cold (yes, even in the middle of summer its pretty darn cold in Yellowstone at 7am) for far longer than necessary. It would take Ed 20 minutes to set up a completely new system which would process people in 60 seconds  – rather than the 8 minutes per person it currently takes. But we decided not to make a fuss (lest we were asked to leave!) and finally, after a 2 hour wait, we were allocated a site.

Yellowstone is an absolutely massive park with a hugely varied array of scenery. The Norris campground turned out to be perfectly positioned in the middle of everything so we  were able to explore a different region of the park each day.

After pitching camp we set out to explore. We went to the visitor centre to gather maps and ideas for what we’d enjoy seeing.

Then we went to admire our first geysers – they not hard to find in Yellowstone – they are absolutely everywhere! They are magical and beautiful to look at but, boy oh boy, do they stink! 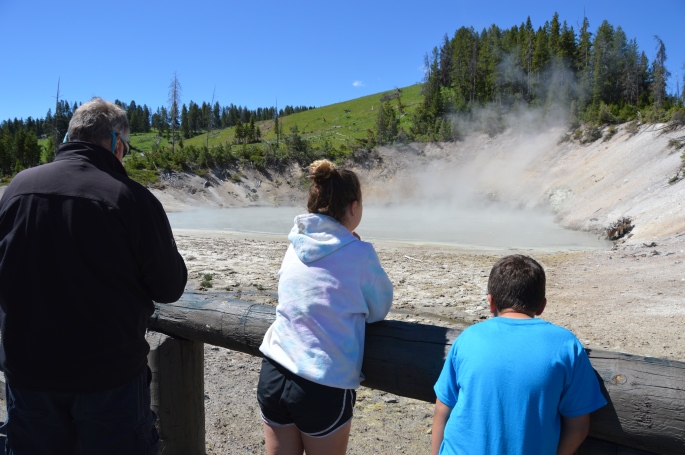 The next day we headed to see the most famous Geyser of them all – Old Faithful. It was pretty cool! 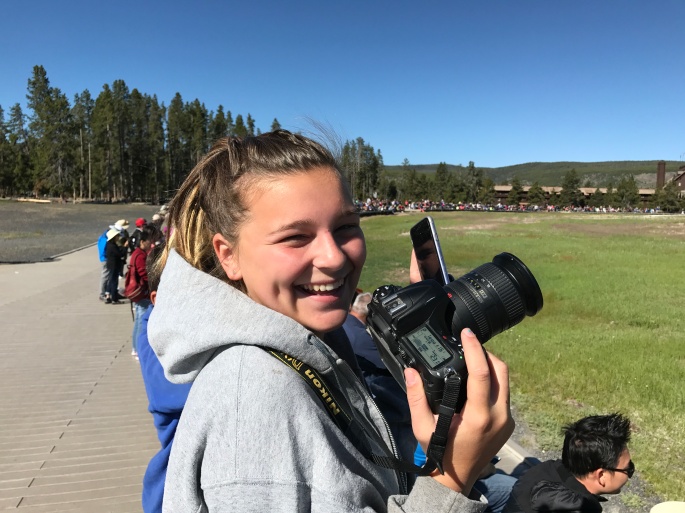 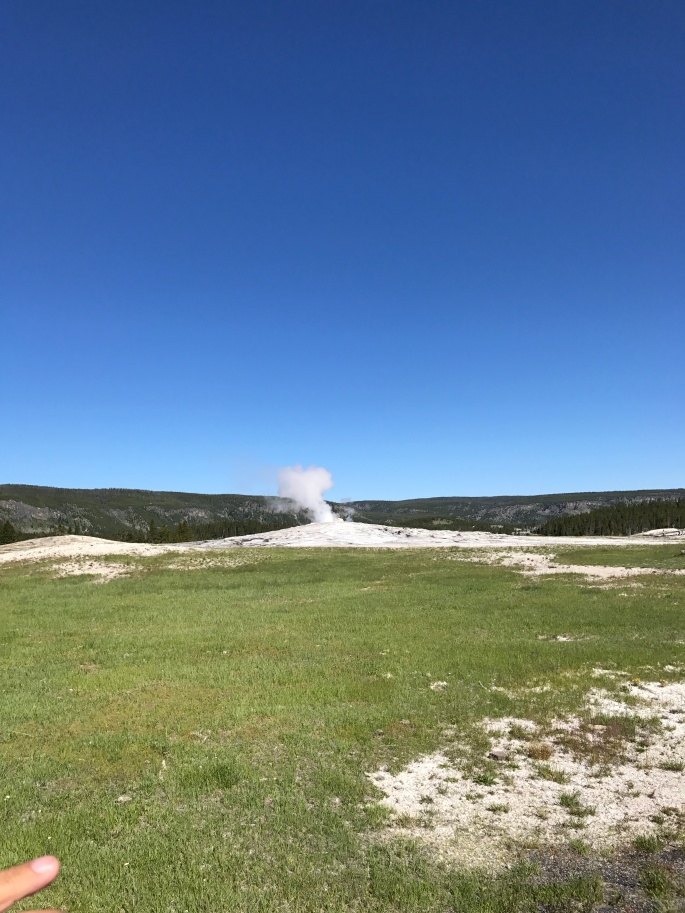 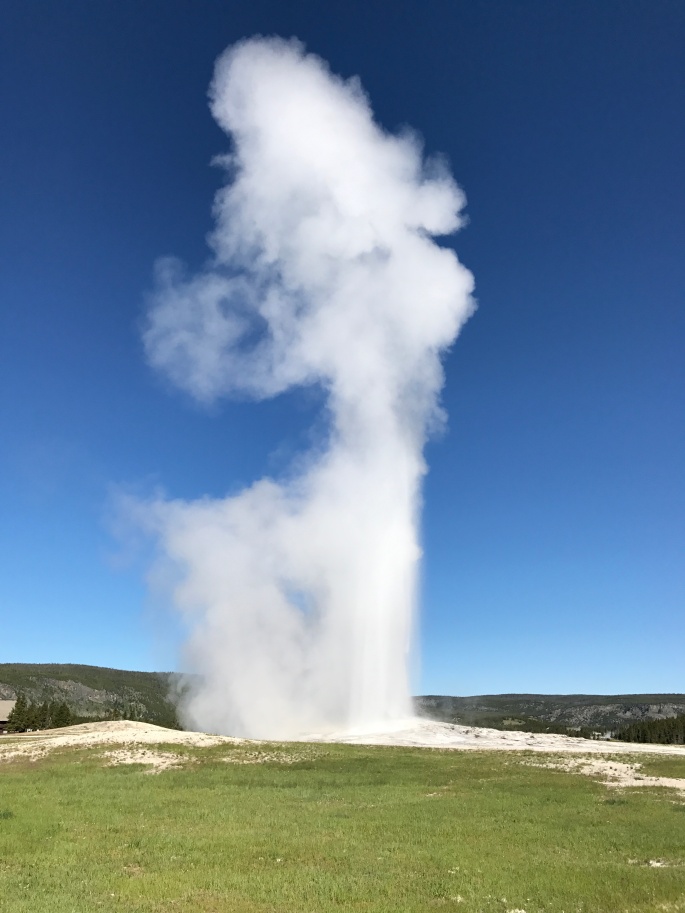 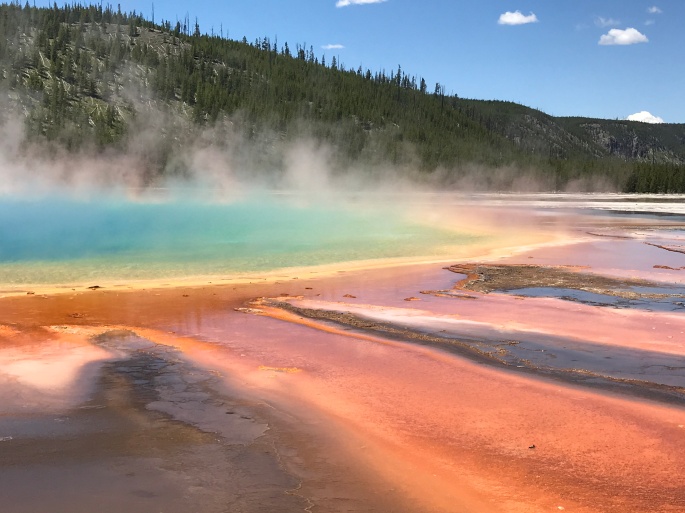 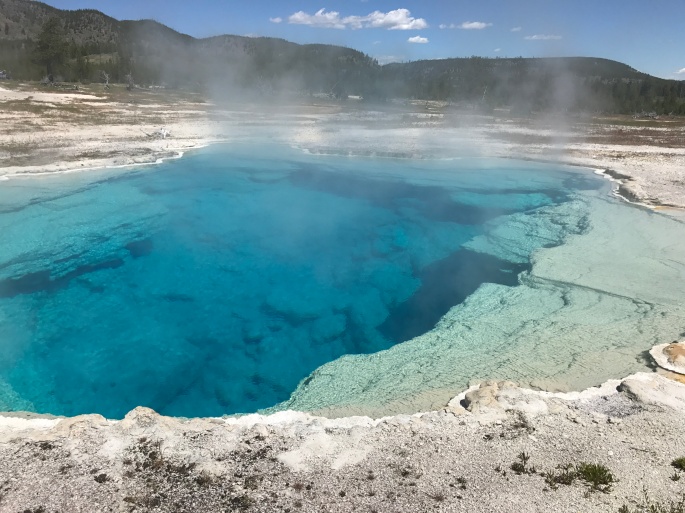 After the excitement of all the thermal activity we decided to go wildlife spotting next. The Lamar Valley is meant to be one of the best places to see the animal who call Yellowstone home. It was a lush, green, rolling valley and it felt so different to the thermal areas. 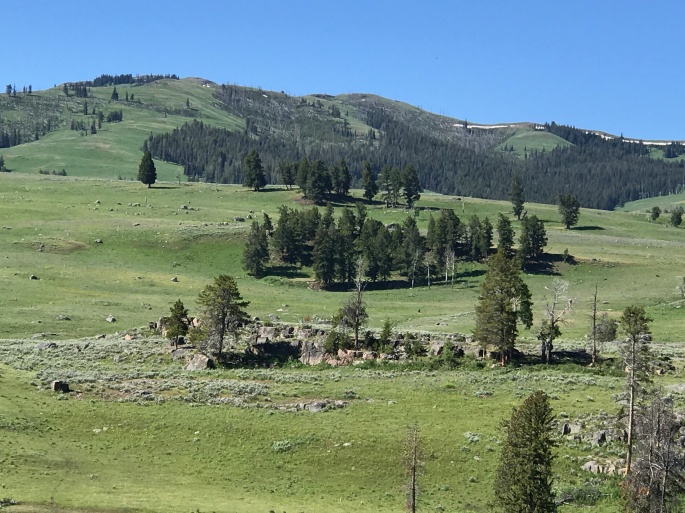 There were bison roaming freely as far as the eye could see.

We went for a lovely hike around Lost Lake. We were carrying our bear spray as it’s a very popular area with bears – but we did not spot any – just some gorgeous wild flowers! 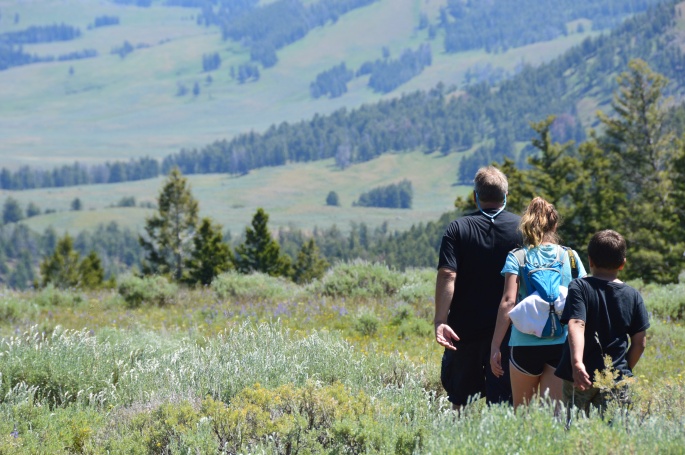 As we were driving back out of the Lamar Vally we came across a number of cars & RV’s  stopped haphazardly in the road ahead of us – a sure sign that wild life had been spotted close by! Indeed… there was a mama black bear with her two cubs up on the ridge above us. We saw them climbing trees – it looked like the cubs were practising!

It was wonderful to see the bears doing their thing!

The next day we went to the ‘Grand Canyon of Yellowstone’ a deep canyon with the extremely powerful Yellowstone River coursing through it and two sets of waterfalls. 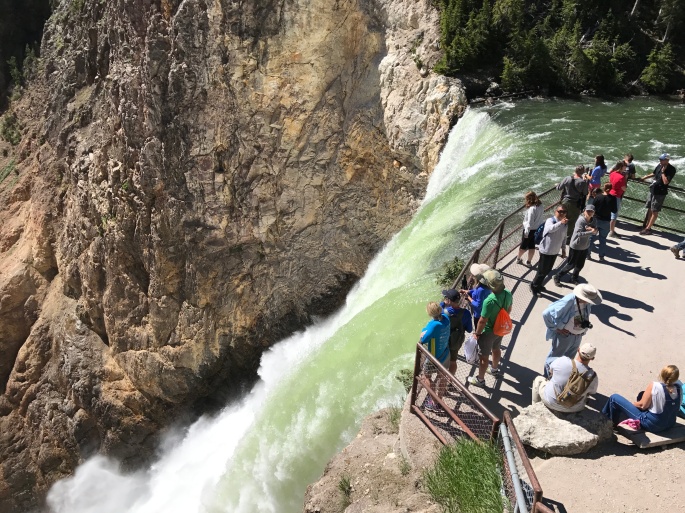 Then we went to Uncle Tom’s Point, a viewing area further down, along the canyon, to look back up at the falls from below. We had to descend 380+ steep steps – and then climb back up again!

JJ said the rainbow was delicious! 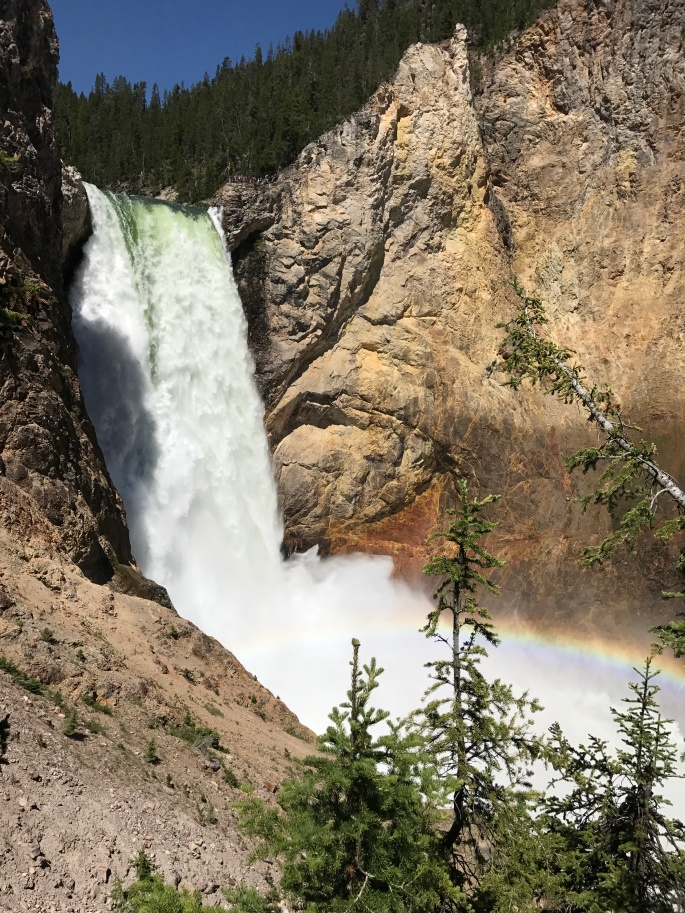 100 years ago brave tourists were making this decent on wooden ladders, wearing long skirts and hats. 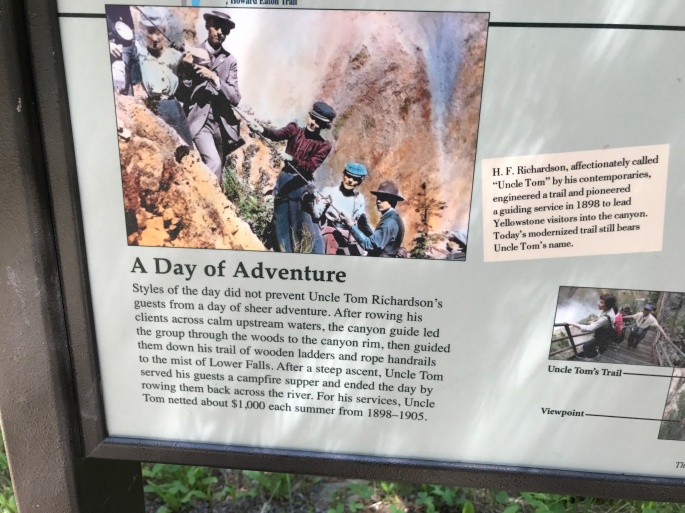 I am very glad the metal ladders were in place for us and I was not wearing a full length skirt!

We spent our last morning at Yellowstone at the Norris volcanic area, which was right by our campground. It was raining (virtually the first rain we’d had on the trip) which made it rather atmospheric (but the rain still did nothing to dampen the dreadful smell!)!

We then headed out of the park via the North Gate, it was the one part of the park we’d not so far seen – the Mammoth Hot Springs area. Here we found some beautiful calcium terraces.

and quite surreal formations… 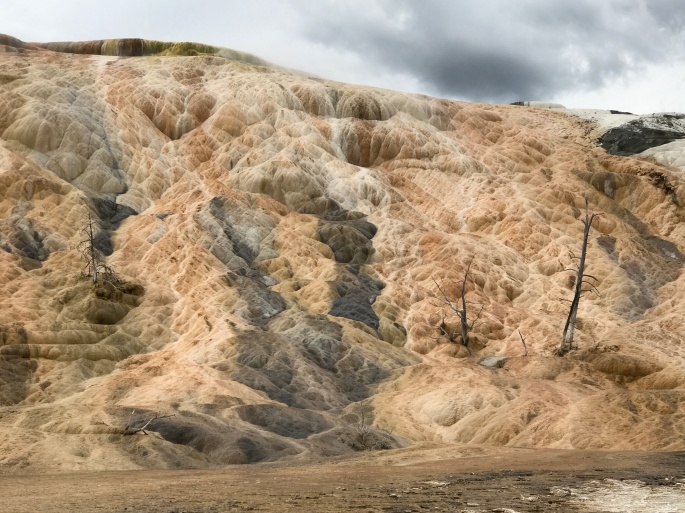 We also drove past the Roaring Mountain…

And on this drive out we were also very lucky to come across some special wildlife very closeup….

A wolf and her cubs…

no…just joking with those last ones…they were taxidermied exhibits in the visitor centre!!

We bade farewell to Yellowstone as we drove through the gate which commemorates the inception of all Americas National Parks, which are now very much enjoyed by millions of people from all over the world, including us!

What Ed says: It is easy to see why Yellowstone was chosen as the first National park. It has such a diversity of environments.
The best thing for me was the chance to break out the fly rod to fly fish for trout. The Norris campsite sits right on the Gibbon river which is a perfect trout stream and this allowed me opportunity to spend the evenings fishing. 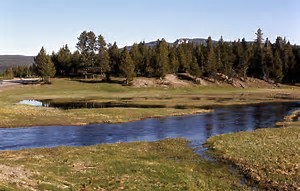 A had a few bites, one broke my leeder and nothing landed, but what fun. Normally to fish anywhere in the US you have to buy that states’ fishing licence but interestingly for Yellowstone you need a specific Yellowstone fishing license because Yellowstone was a national park before Wyoming was a State!!!
You can easily spend a week in Yellowstone but the trick is to get up early and visit the places before lunchtime, then go and chill in the afternoon. This way you are ahead of all the crowds coming in from outside the park each day.

The National Parks campsites are great but their management of the Norris Campsite needs an overhaul. Right now if you are on a site you have until 11am ON the day you were supposed to be leaving to let the managers know that you will in fact be staying that night. This is crazy as it means they don’t know until after 11am how many campsites will actually be available for new arrivals that night. It would be easy to change the ‘renewal’ deadline to 6pm the day before the campsite is meant to be vacated. This way the managers would know the night before exactly how many sites would be available for new arrivals the next day! Also utilising a T- card system for the sites would be far more efficient for the somewhat elderly camp hosts to manage……..not rocket science.
Loved the “Grand Canyon” but hikes from the Roosevelt lodge looking up the Lamar valley are a must.