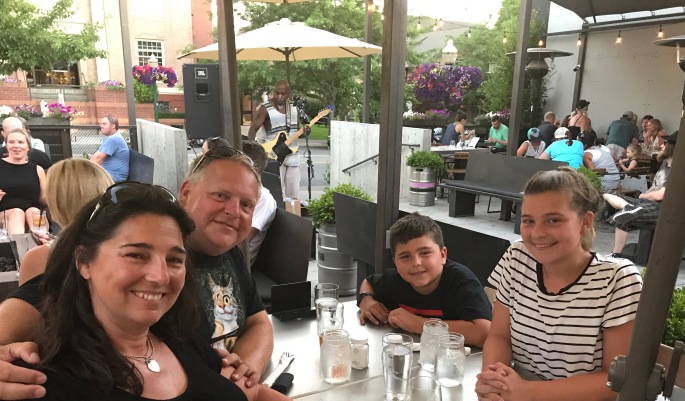 We left Glacier, destination Seattle. It was a 570 mile journey so we decided to break up the drive and stop over night in a town called Coeur D’alene, Idaho. We’d met some people in The Grand Tetons who told us it was a gorgeous place. I have to say it did not disappoint. The town was set around a huge lake and had a real holiday atmosphere. We arrived in time to take a bike ride around the side of the lake and enjoy the views.

The beaches were packed and the water was teaming with boats and people having fun – probably because it was a blistering hot 100 degrees at 5pm!

Since it’s such a bike friendly place we cycled to a restaurant made famous on the “Diners, Drive-Ins and Dives” TV show for dinner. We had a drink and an appetizer – Idaho Nachos – ie Nachos made with potatoes rather than corn chips! But I decided it was actually too much of a dive and we could do better. We cruised down to another restaurant I had spotted and this turned out to be much more of our kind of thing. A superb modern setting, sleek décor, 50 craft beers on tap and live music. 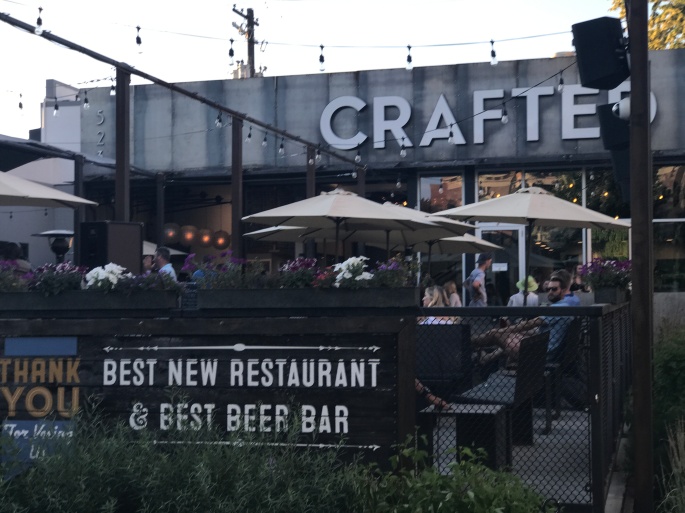 Fun was had by all, especially JJ. He tried his best to earn a coffee and a puppy…

Since he’d already had some potatoes the only thing he wanted on the menu was the deep fried Oreos – we were in a good mood so we let him order them for his main course! 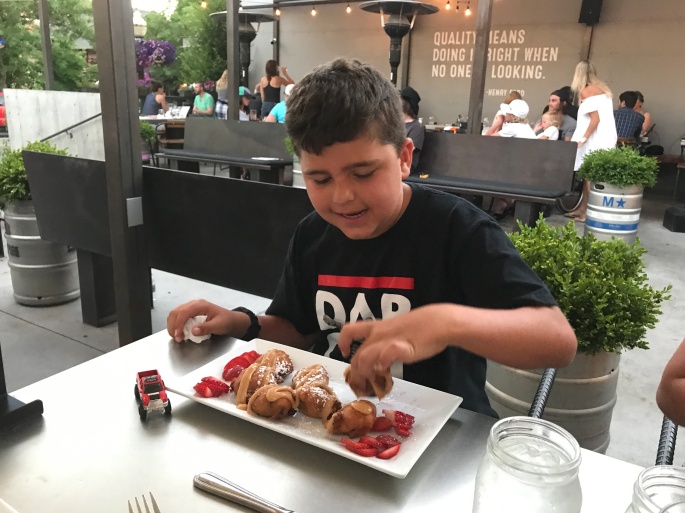 The next morning we set out for Seattle. We had booked a great little AirBnb house in a lovely neighbourhood for 4 nights. One of the neighbours told us about a Seafood Festival which was happening over the weekend were there. We were able to ride to it via the Burrard Locks. The locks were amazing – the longest I have ever seen.

There was also a very cool fish ladder which numerous fish seem happy to use to get back to their spawning ground. I have no idea how they know what to do but they manage! 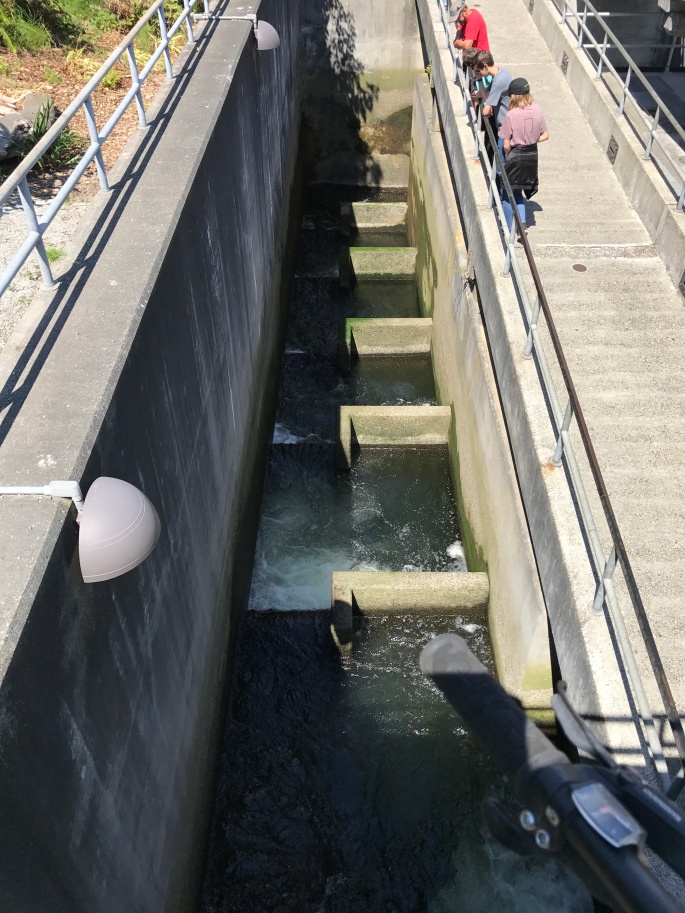 The next day we explored Pike Place market. Wow – I have never seen seafood like it. Absolutely yummy!

And there must have been 100 people waiting outside the first ever Starbucks, just to get in and buy a coffee!!

Ridiculous since there are 142 other Starbuck branches they could go to in  Seattle!!!!

We had an Oyster lunch and then headed off for a “Duck Tour” of Seattle. This is a city tour in an amphibious vehicle. 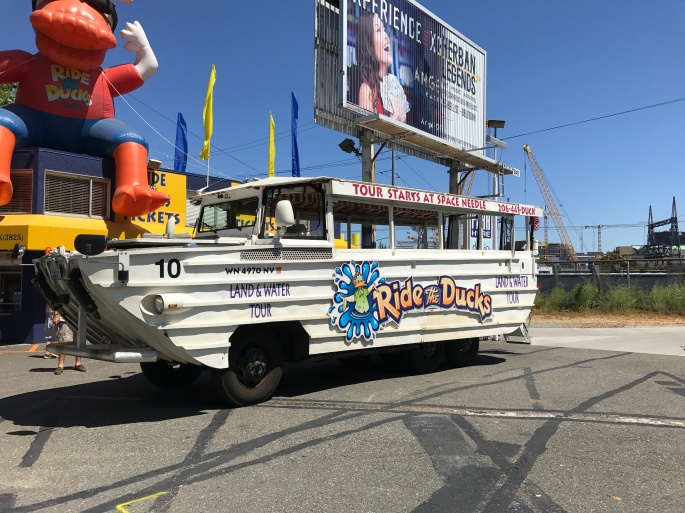 It was great fun – we drove on the roads and into the bay! Our tour guide gave us loads of interesting information about the city and entertained us with a whole host of songs and costume changes!

The city was spectacular from the water.

The fireboat was giving an impressive display.

And we saw a young chap who has certainly mastered the flyboard. 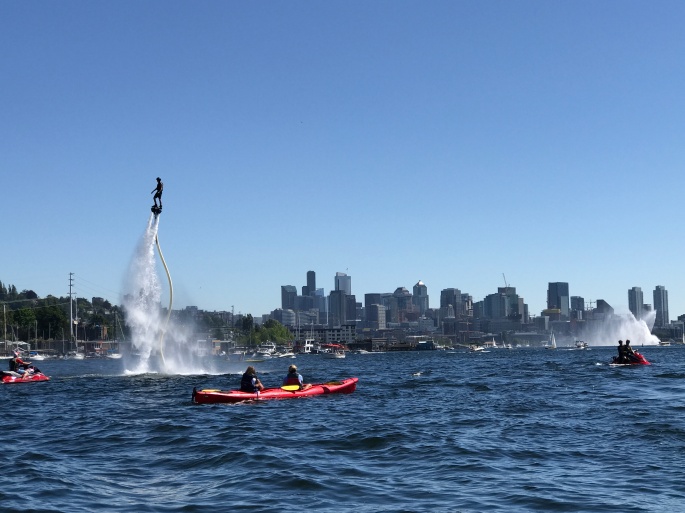 We ended the day at the Bill and Melinda Gates Foundation.

They are from Seattle and still live here so this is where the foundation is based. The foundations’ welcome center is stunning and is incredibly well thought out. They have a number of interactive displays explaining the wide range of work the foundation is involved with, why and how. Some of the subject matter, like child sex slavery is very upsetting but it is covered in a very appropriate way. 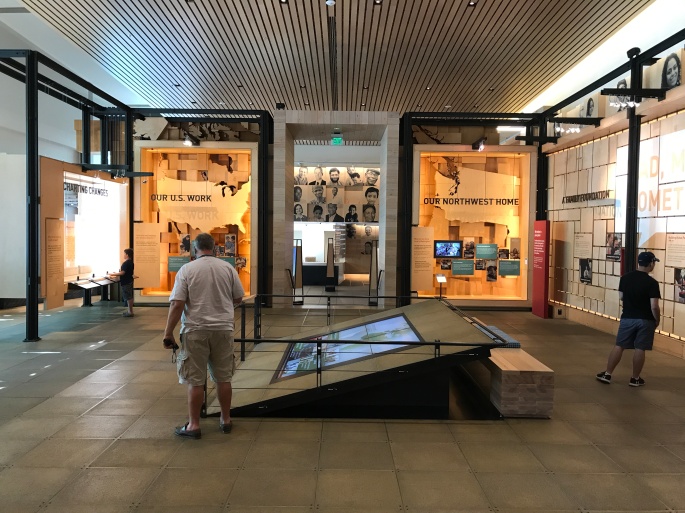 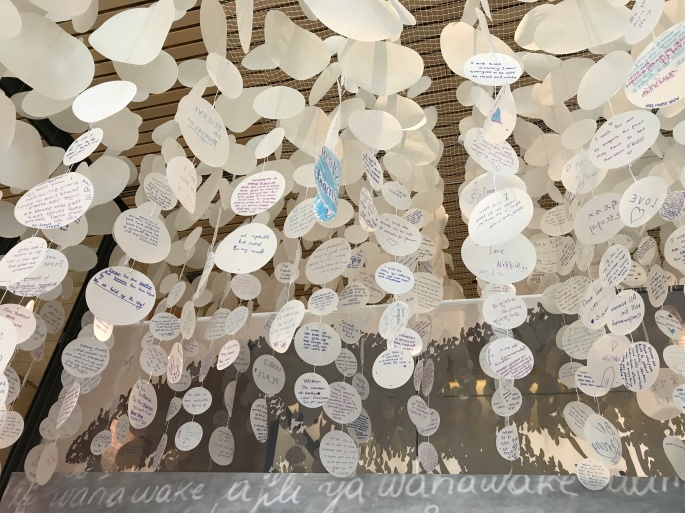 We left amazed and inspired and with a much deeper understanding of and respect for what the foundation is achieving.

Our last day in Seattle was spent at the hugely impressive Boeing Factory. It was quite weird to arrive at what is, to all intents and purposes an airport, but not to be flying anywhere!

While we waited for the tour to start we looked around the display center, which like the Gates Foundation, was superbly designed. I learnt a great deal about Nano atoms! Turns out they are pretty cool and are changing our world! 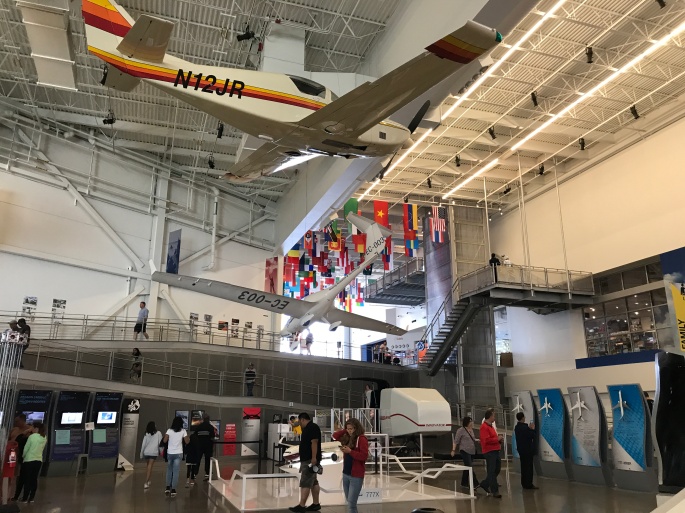 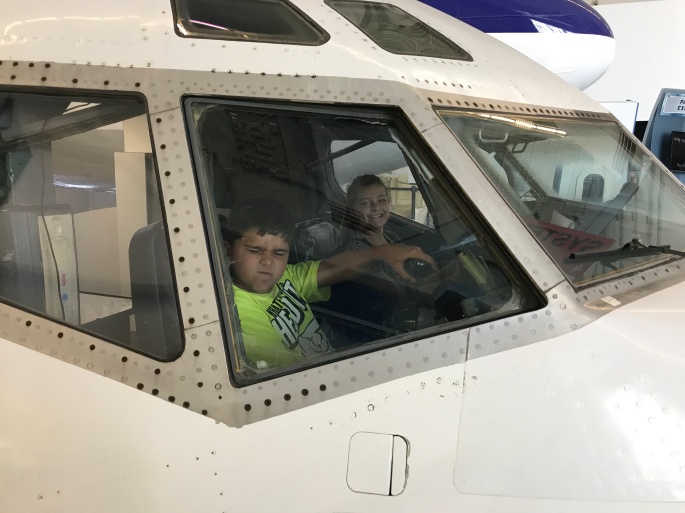 Then we headed off on the tour. Unfortunately we were not allowed to take photos. They said it was so as not to interfere with the sensitive plane electronic systems – but we think it’s to stop the spies from Airbus!! We were guided around 2 of the mega hangers.

These are the biggest buildings in the world. In the early days clouds used to form in the ceilings of the hangers and it would rain – but they have improved the ventilation system so precipitation is no longer a problem! Thousands of people are at work on the planes 24 hours a day – but we hardly saw a soul – everything is on such a massive scale people are spread out like ants on a football field! It was interesting to learn that Boeing realized they needed to speed up their production times and they called Toyota for help. By introducing some of Toyotas production methods they shaved 4 days off the manufacturing time of each plane. Whereas most of the planes are built from scratch in Seattle, the newest addition to the fleet, The Dreamliner, is a composite carbon fiber plane. As a result the different sections can be completed in different facilities around the world and then brought to Seattle for final assembly – which then only takes 4 days. Boeing had to create a new kind of plane – the Dream Lifter – to bring the various parts of the Dreamliner to Seattle. Six of these fly around the world collecting the various sections from where they are made!

Once a plane is finished the Boeing test pilots will take it for a spin and check everything is working. Once they are satisfied that the new plane is perfect the pilots from the airline which is buying it come over and give it a test flight of their own. Once those pilots are happy they sign on the dotted line and fly the new plane back to home base! So, for anyone thinking of buying a Boeing do remember that they don’t deliver! And by the way, get your order in now – their order book is full until after 2020!

After the tour we headed down a couple of miles to the coast for a gorgeous seafood meal at one of Seattles iconic restaurants.

We loved Seattle. Sadly I found out too late about The Chihuly Glass and Garden. It seems that Seattle has become the center of the Glass Blowing World. Apparently the The Chihuly has the most beautiful display of giant glass ‘sculptures’. I would love to have seen it – but we ran out of time. I guess we will just have to go back!

What Ed says: The drive from Montana to Idaho confirmed that the potato State is my second favourite state: great fishing rivers, perfect deer and elk hunting, but alas, the winters are still too long & cold for Justine!
However it does seem that the northern states of Montana, Idaho and Washington are leading the way when it comes to craft beer. I have never seen so many IPA’s! They have plenty of Cascade hops to use and are doing a truly amazing job.

Seattle was fun and the salmon ladder at the locks interesting. What was amazing is that the 1st nation people are allowed to net salmon right by the salmon ladder…..talk about shooting fish in a barrel!!!
The trip to Boeing is well worth it, just to see the scale of it. It is certainly a lesson in parts management and ‘just in time’ delivery. The undercarriage of the one of the planes comes finished from the UK however they arrive in Seattle 24hrs before the plane rolls off the line……no under carriage and it’s not rolling anywhere! You need to have faith in your supply chain………….
Oh favourite west coast oysters are ‘Fanny Bay’ first tasted in Seattle and to be re tasted in Victoria and Tofino…… 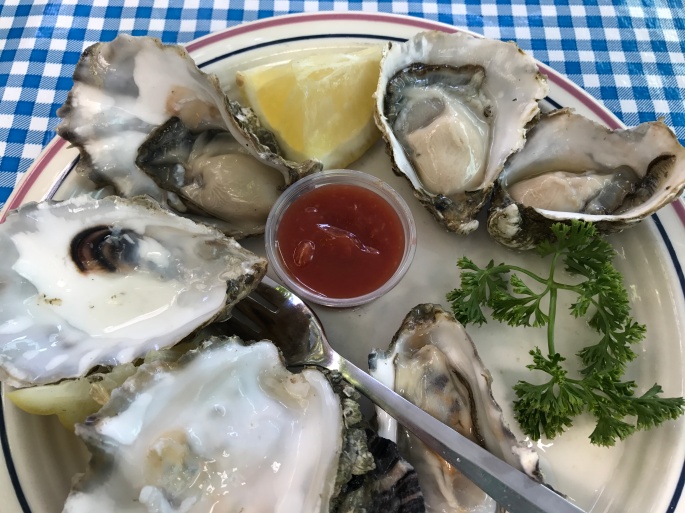